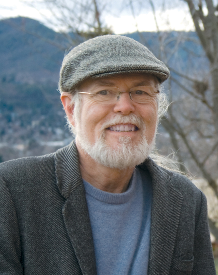 “Brian connects with the audience, explaining the history of the songs, adding jokes and anecdotes.  The atmosphere is difficult to describe . . . it is a warm, intimate feeling that makes the audience feel very connected to the performer. It’s easy to tell that this musician loves to perform.”

Born with five fingers (no thumb) on his right hand, Brian Freeman developed and honed a unique flatpick/ fingerpick guitar style that is at-once blazing, at-once tender and always melodic.  The solid rhythms and intricate melodies beautifully compliment his rich, warm vocals and fit his Celtic and original material like a well-worn glove.

Brian has been performing folk music for the better part of  forty years, primarily throughout the Northwest and California with occasional tours in Scotland, England and the New England regions. Traveling to Scotland 30 years ago to explore his family roots exposed him to the music of his heritage and soul, and he’s been performing it ever since.

Praised as an accomplished instrumentalist, passionate singer and compelling storyteller, Brian sings songs that leave audiences feeling like they have just had a conversation with a good friend.

Brian has shared the stage with many of folk music’s top performers including The Battlefield Band, Doc Watson, The Kingston Trio, John Renbourn, Pentangle, Norton Buffalo and Holly Near to name a few.

He has produced eight albums on his Fifth Finger Music label including: Early Mornin’ Late Night People; Fifth Finger Music; Place In My Mind; Can You Hear Me; Songs of Robert Burns; A Bottle and a Friend, Staffa, Isle of my Heart, and his second collection of Burns’ songs Contented Wi’ Little and Cantie Wi’ Mair.

YouTube Channel: Brian Freeman performing "Songs from Upstairs": A collection of Brian's original, folk and Celtic songs available for all to enjoy:  https://www.youtube.com/channel/UCTUSJ6bq4dy0mmFaD7LRQzw